This blog reflects my deep interest in the different ways the various cultures and subcultures in this world conceive of the world and our lives within it. I was born in Asia, hold a UK passport, lived for most of my adult life in France, and now live in the US as a resident alien, working as a psychotherapist in private practice in San Francisco. Issues of cultural identity and displacement are very close to 'home' for me, and for many of my clients.

Here's a fascinating article about a syndrome found in foreigners who visit India with high expectations:

Posted by Rachael Vaughan, MA, MFT at 9:46 AM No comments: 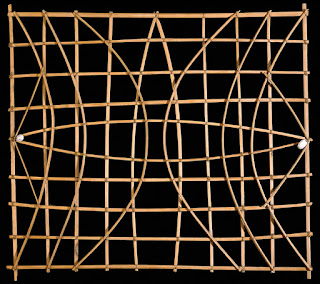 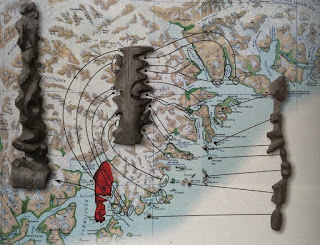 An article at Atlas Obscura presents carved wooden maps made by the Tunumiit people of Greenland before contact with Europeans. It says, "the maps show how the Tunumiit cognitively organized their world, and have captured the imaginations of map enthusiasts around the world for over half a century. But as time passes the maps have acquired a new mythology that doesn’t quite suit them. Anecdotal descriptions of the maps online today compare them to some sort of archaic, ruggedized handheld GPS device: waterproof, small enough to fit inside a mitten, and naturally buoyant. It’s easy to picture a lonely seal hunter in his kayak using the map to navigate through an archipelago by the light of the moon. But this is how we use modern maps, as roadside companions, and suggesting that the Tunumiit used them the same way is ... Eurocentric...[since] there is, in fact, no ethnographic or historical evidence that carved wooden maps were ever used by any Inuit peoples for navigation in open water, and there are no other similar wooden maps like these found in any collection of Inuit material anywhere else in the world"

It goes on to explain that the Inuit people have traditionally used carvings "to accompany stories and illustrate important information about people, places, and things", and says, "a wooden relief map, would have functioned as a storytelling device, like a drawing in the sand or snow, that could be discarded after the story was told. As geographer Robert Rundstum has noted, in Inuit tradition, the act of making a map was frequently much more important than the finished map itself. The real map always exists in one’s head."

Stick charts from the Marshall Islands 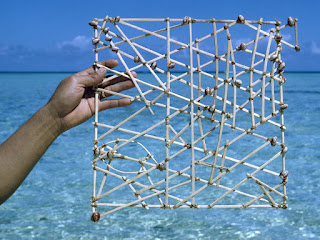 The Marshall Islands stick charts, which date from at least the middle of the nineteenth century are called "rebbelibs, medos, and mattangs" in local languages. They focus not on land forms or coastlines but on the sea itself and particularly the ocean currents--which tells you something crucial about the way the people here see the world.

National Geographic says there are two different types of charts: "The first and probably older type... contains abstract representations of how waves interact with bodies of land in general. The second type illustrates actual islands, often represented by cowrie shells, along with swell patterns identified and recorded by pilots. “There aren’t that many examples from across the Pacific of this kind of navigational knowledge being encoded or physically represented,” says anthropologist Joseph Genz of the University of Hawaii. He says the charts were used mainly as teaching devices rather than real-time way-finders. They help to impart perhaps the most crucial concept in the Marshallese navigational tradition, that of the dilep, or “backbone wave.” “People still describe the dilep as the most important wave to find,” Genz says. “It’s like a path you can follow to the next atoll. Instead of going landmark to landmark, you go seamark to seamark.”

For more on traditional indigenous world views and in particular the ocean navigation of the Pacific Island peoples, read Wade Davis's book The Wayfinders: Why Ancient Wisdom Matters in the Modern World. 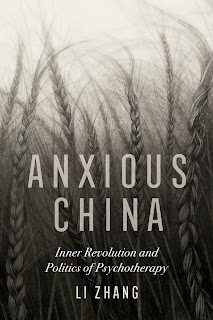 I teach on the online Chinese MA in Applied Psychology being offered by the California Institute of Integral Studies and Zijing Education Group in China, and it was my students that alerted me to this newly named syndrome.

Here's another point of view though, suggesting sampling bias may be part of the perception of students' negative mood.

For an excellent discussion of the state of the burgeoning mental health industry in China, see Li Zhang's 'Anxious China'.

Posted by Rachael Vaughan, MA, MFT at 8:38 AM No comments:

Living alone is a new thing in South Korea, which values family, community and work.

This article describes the new phenomenon. Sometimes characterised as lonely, it's increasingly a choice for singles who love their solitude and freedom. 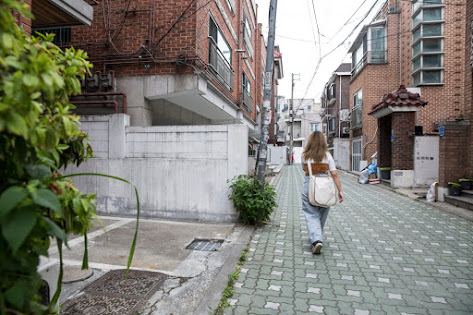 Posted by Rachael Vaughan, MA, MFT at 8:36 AM No comments:

Hikikomori: the Japanese Hermits Who Stay in their Room for Years

Hikikomori or “social withdrawal” now impacts an estimated 700,000 to 1.5 million youths across Japan, who stay isolated in their rooms, and disengage from social activities such as school or work for months, years or even decades. 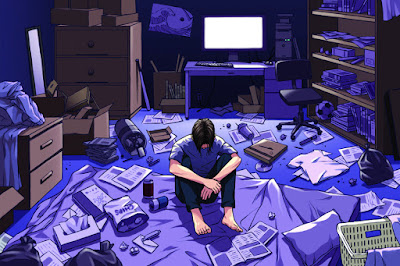 Typically the hikikomori is a young male, often the oldest son in an upper-middle class, nuclear family. Men are four times more likely to become hikikomori, and the onset of symptoms often occur in childhood as a form of school refusal which gradually leads to full withdrawal in adolescence. Hikikomori frequently present a profound sense of apathy: disillusioned by society at-large, these young men lack the motivation to engage with life and have difficulty developing their own identity.

While clinical cause is still unclear, studies from the past decade have begun to identify a correlation between hikikomori and autism spectrum disorder (ASD). Hikikomori individuals have a developmental history of early childhood language delay, a severe shyness and preference to play alone, and a focused interest on numbers versus imaginative play. They have difficulty fitting in and often experience bullying, which may lead to truancy and trigger social withdrawal. Like people with high-functioning ASD, many individuals do well academically and develop compensation strategies to cope with social challenges in childhood; therefore, the earlier symptoms may go unnoticed and onset of hikikomori may sometimes occur in the individual's late 20s.

The theories on the etiology of hikikomori--which began to be noticed in the 1970's--are many, ranging from the depressed economy, a strict education system, to a culture where parents place immense pressure on their eldest son. While these factors may contribute to the increase of hikikomori in recent decades, I believe they are merely triggers for the onset of the condition and the true etiology is buried deeper in history. By withdrawing and isolating themselves from the world, I believe individuals with hikikomori are restoring their inner spirit – tamashii (Japanese for spirit/soul) – to reemerge stronger and better adjusted to the world around them.

Japan has a long history of isolationism, seen in its mythology and early Shinto and Confucian religious beliefs. Solitude and introspection is inherent in the Japanese spirit. However, the rapid modernization of post-war Japan dramatically changed the nation from its core. Rituals and tradition were lost as nuclear families became the norm, artisans and craftsmen disappeared with industrialization, and spiritual practice declined with less than 40% of the population now saying they practice a religion. I believe this created a generation of youths with little access to spirituality, who–triggered by the imbalances in modern society–are now experiencing a spiritual crisis. They are searching for spiritual richness in their lives instead of the material success society presents as self-actualization. They withdraw and isolate themselves into solitude that, for the first time, offers them space to explore their consciousness and purpose in life.

The rising popularity of mindfulness in young adults illustrates a culture in need of stillness, introspection, and a foundation to rebuild the Japanese spirit. This perspective also allows us to understand why hikikomori is now emerging in other countries around the globe. The loss of culture, tradition and spirituality is an impact of globalization that many nations face, and in this way, spiritual crisis is an issue affecting all modernized countries.

For a longer, in depth investigation of hikikomori, click here. 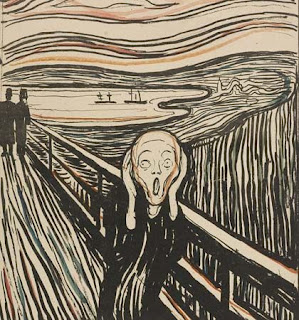 Refugee children in Sweden are falling into a state that looks like a coma, when their family's applications for asylum are denied. The so-called "resignation syndrome", or uppgivenhetssyndrom, has so far been diagnosed in over 400 children. It seems unique to Sweden, and is found mainly in children from former Soviet states, many of whom are Roma.

A New Yorker article on the phenomenon has a detailed account of the syndrome and its manifestations.

The children, who have stayed in these comas for months at a time, are not faking, though their brains are not damaged. They are described as "“totally passive, immobile, lack[ing] tonus, withdrawn, mute, unable to eat and drink, incontinent and not reacting to physical stimuli or pain.”

One of the children describes feeling as though "he were in a glass box with fragile walls, deep in the ocean. If he spoke or moved, he thought, it would create a vibration, which would cause the glass to shatter. “The water would pour in and kill me,” he said.” The boy has now recovered, after his parents were granted residence permits for the family. This appears to be the only cure for the syndrome. Other children, whose families have been deported, are still in comas in their home country.

The director of a child psychiatry center in Stockholm has proposed that the phenomenon is a kind of "willed dying", and likens it to a syndrome found in some prisoners in Nazi concentration camps who “stopped eating, sat mute and motionless in corners, and expired.”

The phenomenon could perhaps be explained as an extensive vagal shutdown, or freeze response, in which the nervous system shuts down as a response to overwhelming and inescapable stress. Why it's unique to Sweden, nobody knows, except that we do know that different cultures develop their own culturally-specific ways of expressing emotional distress.

It appears that the refugee children in Sweden have developed a new meme for expressing the fear and despair experienced by refugees facing deportation.

Posted by Rachael Vaughan, MA, MFT at 9:21 PM No comments:

The Algonquin Concept of Wetiko 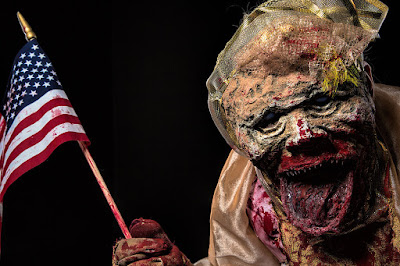 I've just found out about a concept I sorely needed, in order to account for the state of our planet, where 8 men own half the wealth, and the very ecosystem is in peril due to human greed. It's the Algonquin concept of wetiko (also called wendigo or windigo).

"Wetiko is an Algonquin word for a cannibalistic spirit or thought-form driven by greed, excess and selfish consumption. It deludes its host into believing that consuming the life force of others for self-aggrandizement or profit is a logical and morally upright way to live."

The wetiko, or windigo, is like the hungry ghost in Chinese tradition: always starving, never sated. It's continually looking for new victims. Whenever a windigo devours another person, it grows in proportion to the meal it has just consumed, so it can never be sated. What a metaphor for capitalism, with its insane imperative for continual growth in a context of finite and almost exhausted resources.

Some native traditions believe that humans who become overpowered by greed can turn into wendigos, and that environmental destruction and insatiable greed are caused by wendigos:

Externalizing a mindset by personifying it in this way helps draw our attention to our own behaviour. That's if you think this is a metaphor. Maybe it's literally true, and wetikos are out there, taking over peoples' minds and causing them to indulge in mad destruction. Personally, I don't have a better explanation for what's happening.

You can read a searing account of the mindset of colonization as wetiko, in Columbus and Other Cannibals, by Native American author Jack Forbes.

Posted by Rachael Vaughan, MA, MFT at 6:08 PM No comments: